This week, the Civil Rights movement lost two of its torch-bearers. Rev. Fred Shuttlesworth died at the age 89 and Derrick Bell died at the age of 80. Rev. Shuttlesworth led the struggle to end segregation in Birmingham, Alabama. He was the last of the civil rights movement’s “Big Three,” founding the Southern Christian Leadership Conference along with Rev. Dr. Martin Luther King, Jr. and the Rev. Ralph David Abernathy. A legal scholar and civil rights activist, Derrick Bell sought to expose American racism through his books, articles and career sacrifices. As the first tenured black professor at Harvard Law School, Bell gave up his position in protest of the school’s allegedly discriminatory hiring practice. For more on the lives and legacies of Fred Shuttlesworth and Derrick Bell, we’re joined by Rev. Jesse Jackson, president and founder of the Rainbow/PUSH Coalition.
Watch Interview at DemocracyNow.org.

HARRY BELAFONTE: When Dr. King was murdered, I was in Atlanta in their home, and we separated ourselves from others who were there in the living room, and she said, â€œWould you come with me?â€ We went into the bedroom, and she said, â€œHelp me select the clothes that I mustâ€”we must dress him in.â€ And it was a very private and a very remarkable thing toâ€”the intimacy of it with her. And as we were selecting the suits and the shirt and the tie and laying it out, she sat on the bed, and she kind ofâ€”a place where she had slept so often with her husband, and all those memories. And I said, â€œWhat is it?â€ She says, â€œYou know, Iâ€™m worried about where this is all going. Iâ€™m worried about the nation, the rage, the anger, and I need to know what to do.â€ And we talked for a second. Then I said to her, â€œYou know, at this very moment in Memphis, thousands of sanitation workers are on hold, because Dr. King was supposed to have been there tomorrow to lead that movement and to speak to the people, and before your husband, our leader, is put in his grave, if you have the will and the capacity to go down there tomorrow and stand up before those workers and let the world know that the movement has not been interrupted, that the process continues, and that all of us, as strong or as weak as we may be, will step into the breach and do what must be done.â€ And she did.

The Rev. Dr. Martin Luther King, Jr. was assassinated forty years ago today. He was in Memphis, Tennessee to march with sanitation workers demanding a better wage. We spend the hour on his life and legacy. We hear from the Rev. Jesse Jackson, who was with King at the Lorraine Motel, where he was killed; Harry Belafonte, who was with Coretta Scott King at the King home in Atlanta on April 4, 1968; Dr. Vincent Harding, a close friend and colleague of Kingâ€™s who wrote Kingâ€™s major antiwar speech, â€œBeyond Vietnam;â€ Taylor Rogers, a former sanitation worker in Memphis; Charles Cabbage, a longtime activist and community organizer in Memphis who met with King hours before he died; Jerry Williams, one of the only African American detectives in the Memphis Police Department in 1968; Judge Dâ€™Army Bailey, a circuit court judge in Memphis and co-founder of the National Civil Rights Museum; and we hear King in his own words, giving his major speech against the war in Vietnam and his last public address given the night before his death in Memphis, Tennessee.

Images from the march in Memphis, via Reuters. 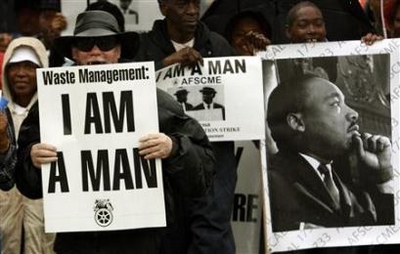 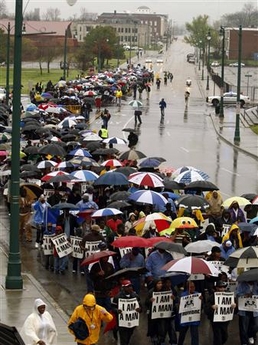 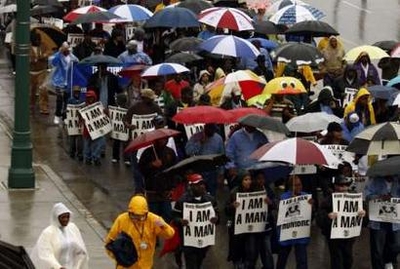