When you were making your great strides in the machinery that is the U.S.A, I watched from your father’s land in Kenya. I watched initially with great fear as those around me cheered in jubilation. I thought myself a coward for being so scared. I feared that, like many before you, you would become a conveniently vilified symbol of what your image does not represent. I feared for the dignity of millions of our African sisters and brothers in the U.S.A for whom promised democracy, redress and reparation have still to be realized. And I feared for your life. We heard, below your King overtones, your Malcolm words and subtle gestures, so that even veteran Black nationalists were singing your praises. And I feared their unwavering optimism, while realizing in your unmatched mobilization how ineffective we had been.

It was a hard truth to swallow. But those times taught me so much about who I am, where I am and what I am holding onto. I learnt that an anchor should hold you but cannot lead you. I learnt that Malcolm’s relevance is not in our outdated Black Power salute, nor our rhetoric, not even in our unapologetic counter to a five hundred year old system of oppression, but that his relevance is in our ability to make his words our own, today, in this time, in our own deeds….

Which is why there are generations like ours, a generation whose manifest destiny is seemingly and simply to remember: to carry from our grandmothers to our daughters the resistance cry of generations. Now, brother Barack, the winds of change are slowly raising the dust. And we have seen people on a move, attempting to rock the foundation of injustice. You have been a character in this determining act in the theatre of humankind. And as the curtain is drawn on African awakening spreading from Guinea, Madagascar and Mozambique to Africa’s North, the world has begun to pay attention. Now is when we will all decide which way history will fall and whether the lion or the hunter will live to tell the tale. I know where you have stood, I know where I will stand. 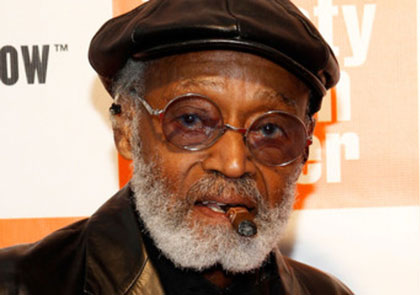 via Shadow and Act

Famed director Melvin Van Peebles, who knows his share of controversy, decided to lend his support to the Occupy Wall Street Movement. His 1971 song “Love That’s America,” from his first Hollywood film Watermelon Man, has been used with various OWS promotional videos circulating on the web now. The latest one, below, is by Cypher Films.

Read more via Shadow and Act

The Occupy activists and their supporters have brought us together as the 99%. They call upon the majority to stand up against the minority. The old minorities, in effect, are the new majority. There are major responsibilities attached to this decision to forge such an expansive community of resistance. We say no to Wall Street, to the big banks, to corporate executives making millions of dollars a year. We say no to student debt. We are learning also to say no to global capitalism and to the prison industrial complex. And even as police in Portland, Oakland and now New York, move to force activists from their encampments, we say no to evictions and to police violence.

Occupy activists are thinking deeply about how we might incorporate opposition to racism, class exploitation, homophobia, xenophobia, ableism, violence done to the environment and transphobia into the resistance of the 99%. Of course, we must be prepared to challenge military occupation and war. And if we identify with the 99%, we will also have to learn how to imagine a new world, one where peace is not simply the absence of war, but rather, a creative refashioning of global social relations.

Read entire article via the Guardian