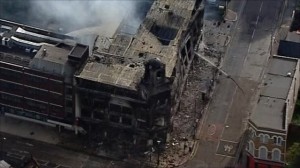 BBC crime reporter Ben Ando said there were rumours in the community that a teenage girl who was part of the peaceful protest had been in a kind of confrontation with police.

He said: “That appears to be the flashpoint. That was the moment at around about just after eight o’clock when it seemed that elements in the crowd decided to pick on two police cars. They were then set on fire.”

As well as Mr Duggan, a police officer was also shot in Thursday’s incident, which happened in what was called a “pre-planned” event, under Operation Trident, which investigates gun crime in the African and Caribbean communities.

Police had stopped a minicab which Mr Duggan had been travelling in.