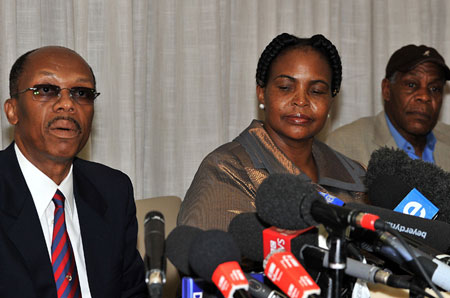 Former Haitian President Jean-Bertrand Aristide is preparing to return to Haiti after seven years in exile. Aristide has lived in South Africa since he was deposed in a 2004 U.S.-backed coup. Reporting from Johannesburg, Democracy Now!’s Amy Goodman speaks actor and activist Danny Glover as he prepares to accompany Aristide. “He is coming back to be with his people. I’m here to be part of that journey with him,” Glover says.

Former Haitian President Jean-Bertrand Aristide has decided to return to Haiti this week ahead of Sunday’s presidential runoff election. Aristide has lived in exile in South Africa since 2004, when he was ousted in a U.S.-backed coup. Despite U.S. pressure on the governments of Haiti and South Africa not to allow him to return, Aristide and his family are planning to leave on Thursday. Amy Goodman is in South Africa to cover Aristide’s return trip to Haiti. She joins us from Johannesburg along with K.K. Kean, an award-winning filmmaker.