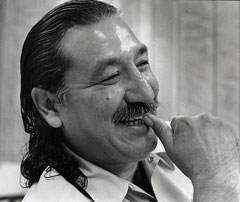 In June 2006, the Commission on Safety and Abuse in America’s Prisons released “Confronting Confinement,” a 126-page report summarizing its 12-month inquiry into the prison systems. The commission follows up the analysis based on its findings with a list of recommendations. Topping the list of needed improvements is better enforcement of inmates’ right to proper health care and limitations on solitary confinement. Five years after the report’s release and despite its detailed and well-researched studies, inmate abuse continues. More recently, news reports from California’s Pelican Bay Prison amplified the need for change, but after the three-week inmate hunger strike ended, the torture of solitary confinement continues nationwide.

“It’s obvious they [the FBI and the BOP] have an agenda out against Leonard. What has happened to him is wrong. See, they have the tendency to know where they want to go in a case, and then build their evidence to that point, and that’s exactly what happened to Leonard,” said Smith.

Torture in the US Prison System: The Endless Punishment of Leonard Peltier | Truthout.